A must-read biological thriller, December 7, 2014
By
JEL
This review is from: The Next Day (Kindle Edition) Amazon

I’ll never forget when a colleague walked into my classroom and whispered in my ear, “two planes just crashed into the Twin Towers.” I immediately became nervous because my father worked in New York City at the time. Little did I know that life in America, and globally, had changed forever.

Change is a theme that is examined in depth, at many levels, in Milt May’s thriller The Next Day.

Jabril El Fahd had resisted inheriting his father’s hatred of the United States, until his mother dies at the hands of the American trade embargo. From that point forward, his goal in life changes from being a doctor to avenging his mother’s death by bringing America to its knees.

American geneticist Alex Smith loses his girlfriend in the Twin Towers on 9/11. At the same time, a continent away, he is infected with a virus he genetically modified. He fights to control the mental and physical changes the virus wreaks on his body, struggling to deal with creature he has become.

The 9/11 attacks were prelude to El Fahd’s plan to destroy America. He infects himself with a deadly virus in hopes of infecting the infidels from the west. El Fahd undergoes changes of his own, but unlike Alex, celebrates the monster he has become.

Mays has created deep characters who you will either sympathize with and root for, or despise and root against, but always believe as you weave through his plot-twisting, page-turning thriller.

You’ll wish you could read faster as Alex and El Fahd careen down a collision course, with the fate of the United States of America in the balance…. Recommend highly.

Charles H. Litz: Though I am not usually a reader of Sci Fi novels, I was drawn in immediately by this story, the characters, and the use of exploding technologies in GMO foods and modifications of DNA that we see occurring now. I have always ignored the concern over GMO foods but I won’t anymore after reading this.

The character development was excellent. The story telling was superb as you could easily imagine in your mind’s eye the characters, the scenes in which the story unfolds and the realistic possibilities and usages of the technologies that the author explores in this modern day tale. Though you always hope the good guys win, I was never sure how this story was going to end.

I don’t know how stories get in the hands of movie producers or screen writers but the entire time I was reading this, I easily imagined the story being told on the big screen. That is how vivid it was for me. 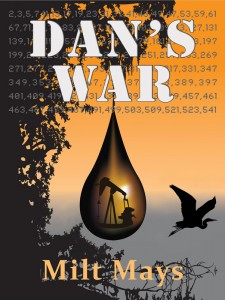 J. McBride:
As I stood at the gas pump and watched the dial spin to fifty-plus dollars, I thought about Dan’s War. Gripe as I may about the high price of gasoline, I had to wonder what life would be without gas. That’s what Dan’s War prompted me to ponder, and let me tell you, I wasn’t thrilled with what I came up with. Author Milt Mays leads us on a thrill-a-minute trek into the world of oil production from Dubai to the bayous of Louisiana. It’s a definite page-turner; the kind of book where you trick yourself by saying “I’ll just read one more chapter.” And then hours later, you’re bleary-eyed and know you’ll be sleepy the next day because you just couldn’t put it down. He gives the reader a slew of unique and very interesting characters, a plot that is all too real, and a writing style that is action packed. The story made me think and entertained me at the same time. How cool is that! Oh and made me hungry for a bowl of gumbo and a slice of pecan pie. Can’t wait to see what social issue Mays addresses in his next book. In the meantime – buy this one. (Amazon Reader Review)

A. M. MacFarlane:
This story really makes you think…what would you do if your computer program–one you made–started an oil war? This book is a fast read, and hard to put down once you start. The idea of an oil eating bacteria also stays with you long after you are done reading this book. Your mind spins with the ideas this story drums up. Like…would it be such a bad thing if all of the world oil simply just disappeared? …(Amazon Reader Review)

J.H. Bock:
The plot and the characters of Dan’s War demanded my full attention. I read it non-stop  Much of the setting is in Cajun country, so well portrayed that you can smell the boudin and cigales bubbling in the pot….(Smashwords Reader Review)

S.K. Galvin:
I started reading the book and couldn’t put it down. … Every part of this book was a true joy to read. Can’t wait to read more of Milt’s work. (Amazon Reader Review)

B. Kincaid:
I read this book a week ago and couldn’t stop thinking about it. Doctor Mays
manages to weave a fascinating story with believable characters combining the
current climate of increasing oil dependence with the latest ideas in science
(nano technology and genetic engineering) to create a crisis that is bound to
enthrall you…(Amazon Reader Review)

JANE H. BOCK:. . . This is one of the three best books I have read in the last two years, and I read lots of books.

I will comment on just two of the special features of this story that rang true to me. An effect of the movie, not the precious book, A River Runs through It, was a swell of Rocky Mountain dude ranches being visited by people who bought their spiffy complete matching ‘outfits’ at one of the chain stores selling outdoor wear. Stony wouldn’t ever be caught in such a rig. Early on we see him described gathering supplies for the expedition. This is an accurate presentation favored by true mountain men. His gear and its arrangement have evolved over his years of wilderness experience.
The second special feature to me in the Guide is getting to know Stony, his tortured soul and the sweetness of his heart. He represents many of the Viet Nam veterans who continue to try to fit into the world today. In that war over 47,000 GIs were killed and over three times that many physically wounded. The exposure of Stony’s deep physical and deeper mental scars greatly moved me. Dr. Mays allows us to take some steps in Stony’s shoes and better understand those who need our help.