My question: Where will this be in 2013 and how will we get there?
The YouTube/Facebook video, now over 50 million views, touts getting rid of Kony, a warlord for LRA who kidnaps kids in the night, has them run his “revolutionary” army, disfigure his enemies, kill their own parents. This travesty must end, and the Invisible Children supporters, including the great guy who made the video should be applauded.

But, and this is a very BIG BUT, are we waging another war against another boogie man instead of finding peaceful solutions? The video wants us to support military “advisers” to the African Army so they can find this monster and bring him in. What exactly is their “advice?” Hint: They are military. The video wants us to make Kony famous, so we can get everyone to be against him. Got it.

Historical rewind: We all wanted to do the same for Hitler, Stalin, Saddam Hussein, bin Laden. How many lives were lost in the War on Terror because of one man—bin Laden. Bin Laden was famous in an instant—9/11. Our country tried to end his continued reign of terror worldwide, not just of a small part of Africa, like Kony. How much money was spent on this same War over the last ten years? But, we finally got him, right? Was it worth it? Did we work hard on peaceful solutions during those ten years of war? How much money went into peaceful ideas vs. new Humvees, tanks, drones, jets, soldiers, soldiers, soldiers, etc., etc., etc.???

My pessimistic side says probably we won’t get him, though my optimistic side hopes for a quick capture, using a “surgical strike” (that means only a few get killed in the “tiny” attack—Right.). And if we do get him, will his methods, his LRA end?

My plea is: Let’s find peaceful solutions to make Kony go away. Any ideas?

Come on! Did you just want the social media to be a video fest, or actually do something useful?

Dan’s War is an award-winning novel about the end of world oil . . . in two weeks. Cajuns and one lone computer geek try to save us against an eco-fanatic and his army who want to get rid of OIL to end global warming.

It’s about WAR, true, but also about family struggles with teenagers serving their country vs. college, and a computer genius with near-Asperger’s and desperate to be a hero at his job, but most of all in his son’s eyes. 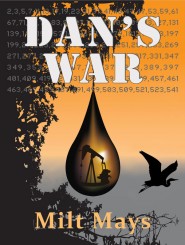